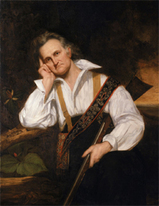 Call of the Wild
From: Art & Antiques Magazine - http://www.artandantiquesmag.com
February 2009
By: Nick Obourn

If there was ever a book to put a man on the map, John James Audubon’s The Birds of America is it. Prior to its publication, Audubon struggled for recognition as a naturalist and artist. He spent years trying to make ends meet as a businessman in the booming frontier towns of 19th-century America. Although a devoted family man, he was often an absentee father and husband, spending long stretches of time tramping through the woods or sailing down rivers in search of his beloved birds. At his lowest moments, he was thrown into debtor’s prison and even stabbed a man in self-defense during a fight over a lost sum of money.

But first and foremost, Audubon was a man obsessed. Through obstacles that would have derailed even the mightiest of ambitions, Audubon stayed true to his goal—to render in watercolor every bird he saw in America and to publish those images. Ironically, this goal would not be realized in the country whose birds he was drawing. The city of Philadelphia, where he had gone to study oil painting with Thomas Sully and where he had been encouraged to try to publish his works, proved to be an “icy city,” as Audubon put it in his journals. In the span of one visit he found himself blackballed by the city’s intellectual elite—a campaign spearheaded by George Ord, the publisher of Audubon’s rival Alexander Wilson—and he was rejected by Alexander Lawson, the city’s preeminent engraver. Both Ord and Lawson took one look at Audubon’s drawings and decided that the signature inclusion of flora and the depiction of the birds as lively, acrobatic creatures constituted embellishment and inaccuracy. “I will not engrave them … because ornithology requires truth in the forms and correctness in the lines. Here are neither,” Lawson wrote.

So in 1826 Audubon traveled to England, where he received a near-opposite welcome to that of Philadelphia. Talk of his drawings spread quickly, and Audubon was soon the toast of the Liverpool. The exotic persona of this strapping woodsman with his long mane of hair intrigued those who flocked to see his work. The engravers Robert Havell Sr. and Robert Havell Jr. agreed to take on the job of publishing the drawings and proceeded to refresh them diligently with aquatint on copper plates. Subscriptions were sold and the work was released in sections from 1827 until its completion in 1838. In the end, The Birds of America comprised 435 color plates, published in the massive double elephant folio format, and Audubon, who had become as familiar with adversity as he had with ornithology, could rest easier having completed a project nearly 20 years in the making.

The tale of Audubon’s journey to publish The Birds of America has been told many times over. But in all these recountings of Audubon’s life, there is a persistent pattern: The Birds of America has tended to hog the spotlight. While it is undoubtedly the crowning achievement of his life’s work and deserving of the attention, this disproportion has left holes in the artist’s biography. It has left certain aspects of his life ripe for exploration, and this is exactly what curators and authors are now doing. They are devoting concerted effort to the unearthed aspects of Audubon’s life, focusing on his influences and inspirations and looking at his early drawings with renewed energy. In doing so they are drawing parallels to his later years and positing new hypotheses about what motivated this intrepid and contradictory man.

On Feb. 13 the New-York Historical Society took a step in this direction with the opening of their annual show Audubon’s Aviary, which this year is subtitled Some Things Old, Some Things Borrowed, But Most Things New. The society has the single largest collection of Auduboniana—as they refer to it—in the world, and each year for the past five years they have hosted differently themed installments of Audubon’s Aviary by placing 40 of their 435 original preparatory watercolors for The Birds of America on display. This year’s aviary, devised by curator Roberta J. M. Olson, examines Audubon’s influences and predecessors, reaching as far back as the 16th century.It is known that many people influenced Audubon’s love of birds, his father being one of the first. On walks in the woods as a child Audubon’s father would, he recalled, “point out (their) elegant movements … the beauty and softness of their plumage, the manifestations of their pleasure or sense of danger … thus exciting me to study them.” But how did Audubon react to the work of artists and naturalists like Conrad Gesner, Pierre Belon, George-Louis Leclerc, the Comte de Buffon, Mark Catesby and even his contemporary Wilson? The exhibition answers this question by comparing Audubon’s watercolors to the avian illustrations of these artists and scientists who were pioneers in the naturalistic tradition from which he learned. This year’s show illustrates how drastic Audubon’s innovations were, and the exhibition text carefully traces Audubon’s relationship with his antecedents.

Anyone who visits the exhibition at the N-YHS will clearly see that before Audubon, drawings from nature were rather staid. The prevailing style was to depict species in profile as lifeless objects against a white, depthless background. This was the fodder for Audubon’s rebellion, which he shouldered so many burdens to fight. But when the artist was young and first began to draw birds, his attempts resembled the flat, academic-driven style from which he eventually moved so far from. They also disappointed him greatly, so much so that he destroyed them in order to force himself to improve. “He does say in his journals when he did a better drawing of a bird he destroyed the earlier ones,” says Leslie Morris, curator of modern books and manuscripts at Harvard University’s Houghton Library, which houses one of the largest collections of Audubon’s early drawings. Morris, along with Pulitzer Prize winner Richard Rhodes and Scott Edwards, wrote the text for Audubon: Early Drawings, a book published in September 2008 by Harvard University Press that examines the early work of Audubon.

The book, yet another newly explored entry point into the life of Audubon, lavishly features Audubon’s work up until 1821, but the majority of the drawings date 1805–07. In these early drawings Audubon’s style is already emerging. “If you arrange them chronologically you do see great skill in the draftsmanship, in the coloring and the shading; you see a detail of the foot or the egg, with some notes about it,” says Morris. “He progresses beyond the bird itself into the habitat to help identify the particular species and the drawing.”

The early drawings are fledgling attempts that demonstrate Audubon’s desire, if not his talent, to express himself graphically. But the book also raises the question of why he was so particularly attracted to birds as a subject. Rhodes offers a theory that equates the artist’s compulsion to draw birds with the violence and death he witnessed as a boy during the French Revolution. (He was born in Haiti, then a French colony, in 1785.) “He wanted almost desperately from a very early age to reanimate the dead,” says Rhodes, who in 2004 published John James Audubon: The Making of an American. “He links those experiences with the desire to bring the dead back to life.” In this light, the early drawings can be viewed almost as failed attempts at sorcery, and the later drawings in The Birds of America can be seen as the mastery of a magic spell.

Rhodes also poignantly notes that Audubon was an avid reader of the French fabulist Jean de La Fontaine, whose books blurred the line between the human and animal worlds. For La Fontaine, anthropomorphism was common practice, and Rhodes claims that from him, “Audubon got the basis for thinking about animals. He began to understand they were more complicated.”While authors like Rhodes and curators like Olson are busy finding new ways to examine Audubon’s life, the art market shows no sign of following them into uncharted territory. Even mature works like his Viviparous Quadrupeds of North America do not command the prices that the birds do. “There is more of an attraction toward the iconic images, the big birds and the great compositions,” says New York dealer W. Graham Arader III, whose Arader Galleries specialize in works on paper, paintings, rare books and maps. “Audubon’s stuff has become top of mind. The market is very strong for the top 100 images.” These big, iconic images, says Arader, sell for between $150,000 and $350,000. And they have not done any damage to Audubon’s popularity, either. “If you walk out onto the corner of 72nd and Madison and ask people to name a 19th-century artist, all of them will say Audubon,” Arader says. As for original editions of The Birds of America, it is believed that only around 135 of the 250 first printings still exist, and almost all of these are in the hands of institutions and private collectors. When a copy of the double elephant folio edition does come up for sale, bidders certainly take note. In March 2000 Sheikh Saud Al-Thani of Qatar purchased a copy of The Birds of America at a Christie’s auction for $8.8 million, a record for any book at auction. Most recently a copy sold in December 2005 for $5.6 million.

In the eyes of the collector, Audubon remains a stand-alone legend. Though new research may ferret out the peripheral aspects of his career, aficionados will most likely always want the artist’s towering, neon-pink flamingo, the alert snowy owls, the plotting turkey vultures and the bald eagle wheeling to the sky, a freshly killed rabbit clutched in its talons.