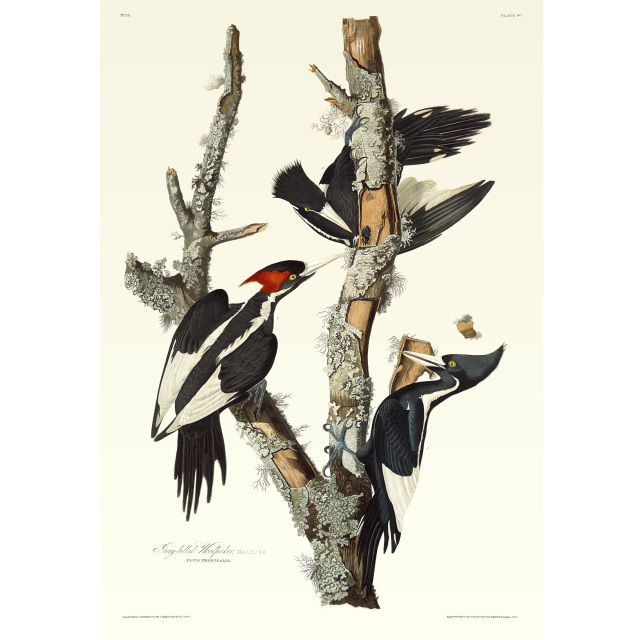 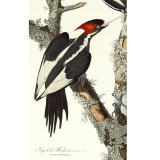 Limited edition of only 200 prints worldwide. This very rare print measures 27 x 39 inches on archival paper. This is a Princeton Audubon Fine Art Edition, produced from the actual original. The Ivory Billed Woodpecker is now extinct like several others that Audubon painted during his time. This beautiful image gives us a glimpse of these magnificent birds as Audubon himself saw them.

Of this bird, Audubon wrote, “The Ivory-billed Woodpecker nestles earlier in spring than any other species of its tribe. I have observed it boring a hole for that purpose in the beginning of March. The hole is, I believe, always made in the trunk of a live tree, generally an ash or a hagberry, and is at a great height. The birds pay great regard to the particular situation of the tree, and the inclination of its trunk; first, because they prefer retirement, and again, because they are anxious to secure the aperture against the access of water during beating rains. To prevent such a calamity, the hole is generally dug immediately under the junction of a large branch with the trunk. It is first bored horizontally for a few inches, then directly downwards, and not in a spiral manner, as some people have imagined. According to circumstances, this cavity is more or less deep, being sometimes not more than ten inches, whilst at other times it reaches nearly three feet downwards into the core of the tree. I have been led to think that these differences result from the more or less immediate necessity under which the female may be of depositing her eggs, and again have thought that the older the Woodpecker is, the deeper does it make its hole. The average diameter of the different nests which I have examined was about seven inches within, although the entrance, which is perfectly round, is only just large enough to admit the bird.”